A Primer on Unpronounceable Cajun Foodstuffs

By this point, even a cursory description of what goes into and what comes out of a traditional or modified boucherie can be overwhelming. By and large, what we're talking here about are foodstuffs that, even accounting for only the most popular in Acadiana, are unknown to foreigners. And, to be sure, the whole thing can seem foreign, given the French influence on product names and practices. So, perhaps a short glossary of boucherie-related foods and concepts can help clear up all that clutter. Perhaps no word in the Cajun food dialect is more unpronounceable than boudin. The concept is not difficult to ascertain. Take what is essentially rice dressing (dirty rice to the infidels), stuff it inside of a casing and smoke it, boil it or grill it. Voil. You got boudin. But as simple as the concept is to grasp, the word remains elusive for unfamiliar tongues. I wont even attempt a phonetic spelling. You wont get it right. Just come down to Lafayette and well teach you. Ill start you off here, though it's not pronounced boo-dan. As noted throughout this series, much of what Cajuns produce with a boucherie can be found in other cuisines. Where applicable, Ive noted some possible connections or points of reference to dishes with which you may be more familiar. 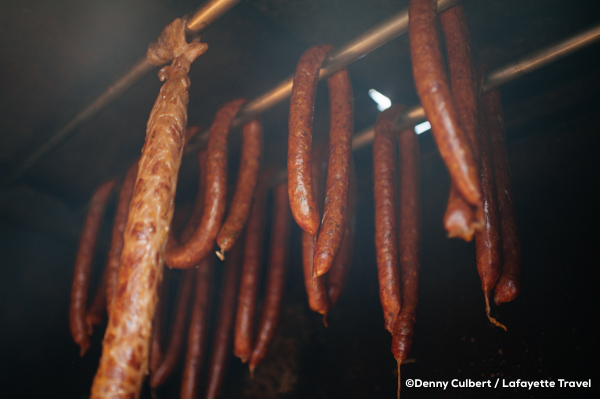 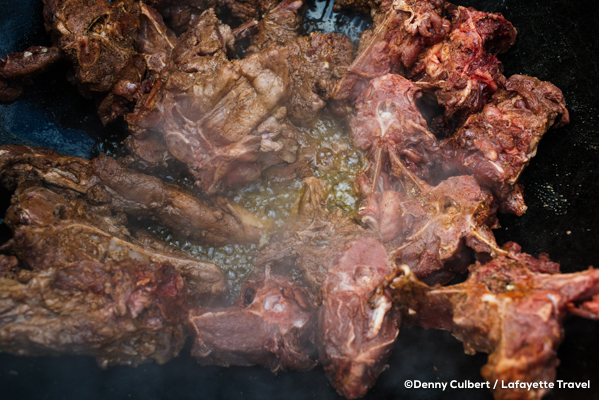 Backbone Stew n. Popular post-boucherie meal for active participants, generally made of meat and bones produced from the hogs spine. Similar to Stew (Every culture on the face of the Earth) 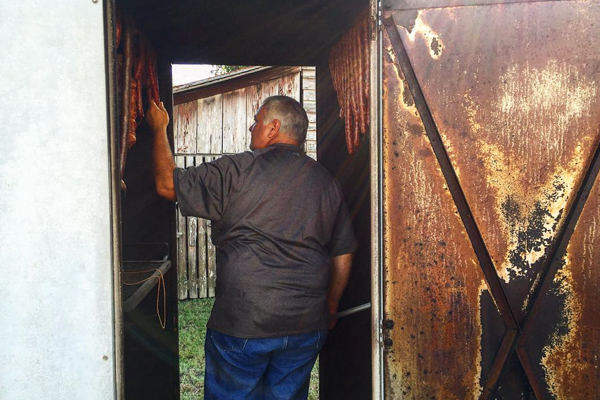 Boucaniere n. A Cajun prairie smokehouse. Often confused with boucherie given its use of the letter b and its French etymology; boucanieres arent themselves known for butchering meat but cooking in a low and slow smoking process not dissimilar to American barbecue. Also, the source of the English word buccaneer, meaning a pirate or a second-rate professional football team. Similar to Barbecue (The Americas, Australia e.g. Shrimp on the Barbie) 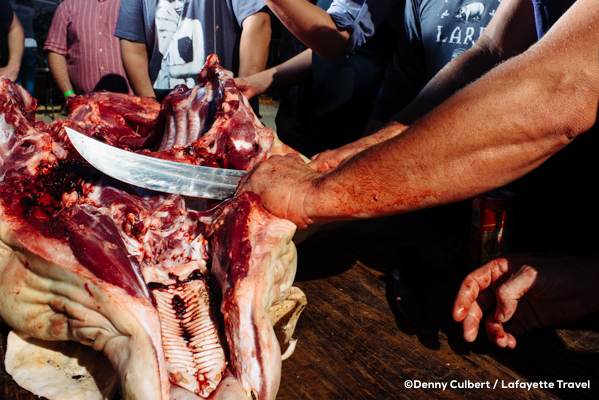 Boucherie n. The traditional Acadian practice of communal butchering. Operated for centuries as a weekly routine for small cooperatives of Cajun farmers. Its heritage of stretched use of proteins has profoundly influenced contemporary Acadiana foodways. Similar to Cooperative butchering methods found throughout Europe and North Africa 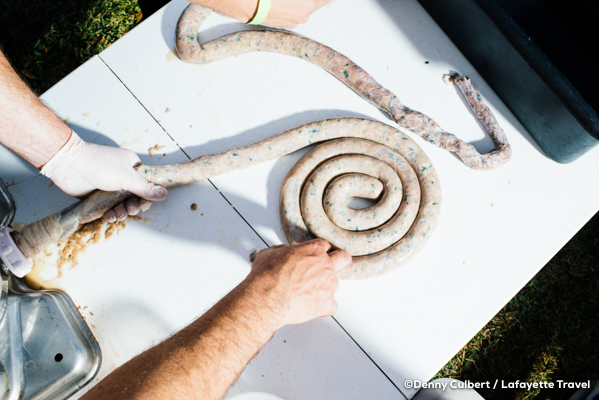 Boudin (blanc) n. A sausage made of rice, pork and seasoning found throughout south Louisiana and often the subject of vigorous regional rivalry. Historically produced in France with pounded chicken or veal, the Cajun variation began as a way of stretching bits of pork offal and tough meat unsuitable for larger cuts into delicious sustenance. Similar to Haggis (Great Britain) 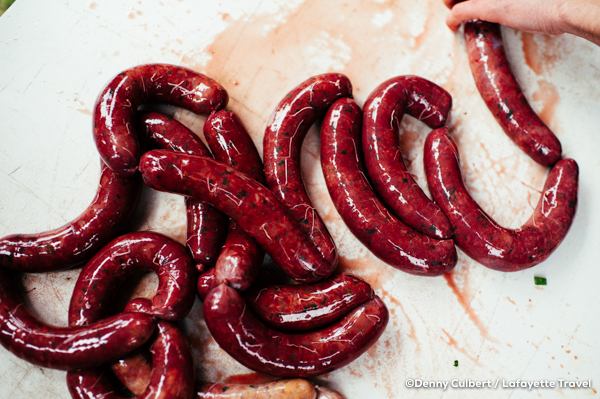 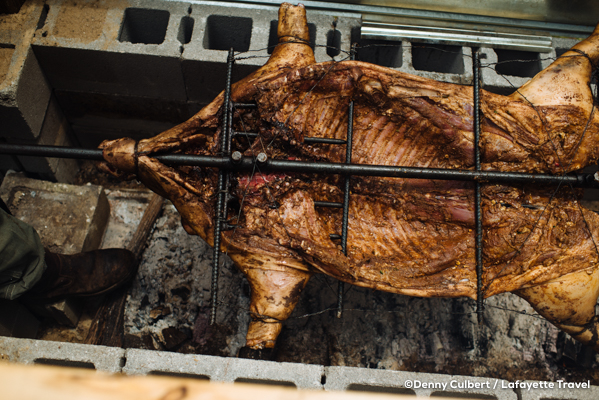 Cochon de Lait n. A celebratory roasting of a young pig. Not to be confused with a boucherie, a cochon de lait was not integral to survival but was typically performed to feed a family for a ceremony or feast. Translates roughly to suckling pig. Similar to Lchon (Spain, Latin America, the Caribbean) 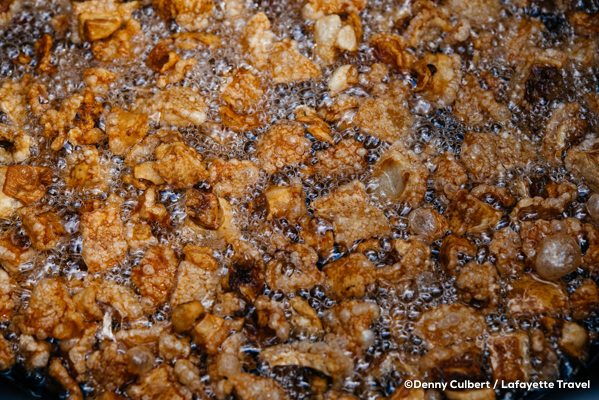 Cracklin n. Fried pig skin and lard, often taken from the pigs belly and served salted and in brown paper bags through Acadiana. Called cracklins due to the skins tendency to harden when cooled, resulting in an imminent threat to your teeth. Others say the name stems from the sound the fat morsels make when they hit a screaming pot of oil. Similar to Pork Rinds (Gas Stations), Chicharrones (Mexico) 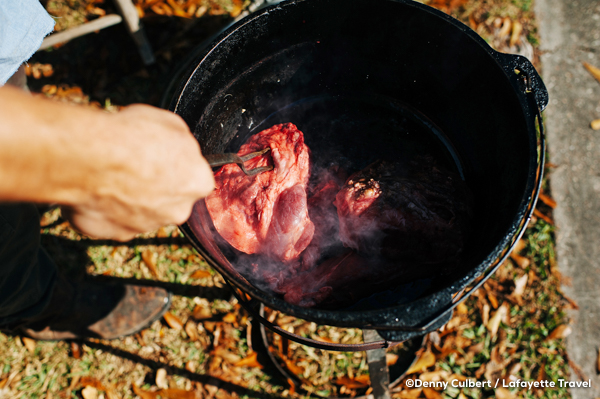 Fraisseurs n. A stew of hog entrails and offal prepared usually during or after a boucherie. One of the more esoteric dishes found in modern boucheries, it is often omitted due to a relative lack of historical ubiquity. Similar to Pha Lau (Vietnam), Menudo (Mexico) 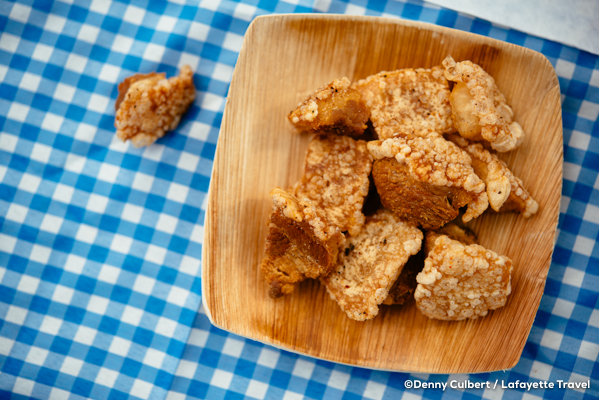 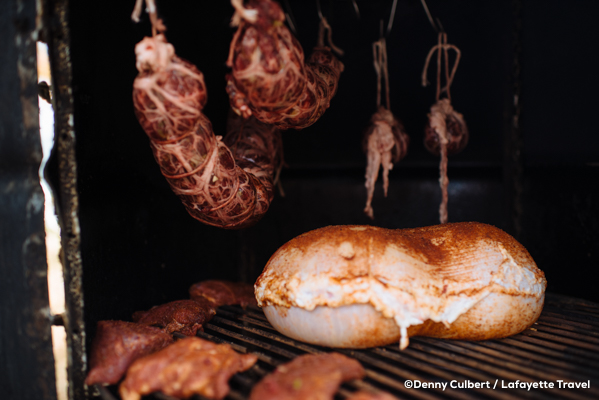 Ponce (or Chaudin) n. A type of sausage smoked inside of a pig stomach. Also known as chaudin, the flavor profile is similar to andouille but is served without casing. Today's version is affectionately called Cajun bologna and often features jalapenos and cheddar cheese. Similar to Haggis (Great Britain) 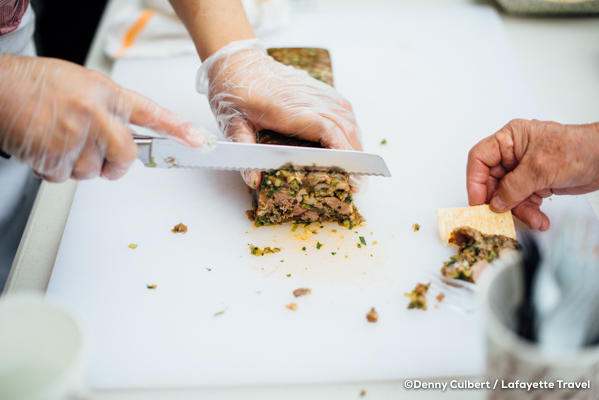 Souse n. Cajun hog head cheese, traditionally made by rendering meat and gelatin from a pig head and combining it with seasonings. It sets in a mold to make a loaf and is often enjoyed with white bread. Similar to Brawn (Great Britain), Scrapple (Pennsylvania), Pork Terrine (French)

When not waxing pompously about food and what should be in it, Lafayette native Christiaan Mader is writing and recording songs for his critically acclaimed band Brass Bed, a fixture of the south Louisiana music scene. He’s performed internationally with Sub Pop recording artist Shearwater, and written Ray Davies fan fiction for Vice Magazine. His music has been featured in publications like Spin, Entertainment Weekly, and The New Yorker, as well as on nationally syndicated radio programs and podcasts produced by NPR and KEXP.