Some time in the 1960s, businessmen with the Japanese electronics company Hitachi flew to southwest Louisiana, specifically, we are told, to Ville Platte. Of interest to them were the curiously high sales marks of their rice-cookers across a region otherwise alien to their products. At the time, Louisiana was the site of the single largest distribution of Hitachi rice-makers in North America, or so it is said. The businessmen toured the outer climes of Acadiana, mouths agape at miles of rice land. Visited, as they were, by the sight of rice farming operations that rivaled those in their native land, they understood the kindred desire in Louisiana for the Hitachi rice-cooker. Photographer Lucius Fontenot has embarked upon a photo journal of Hitachi rice-cookers and the Cajuns who love them. We've partnered with him to share a short excerpt from his collection on our blog. We hope you enjoy the stories behind the phenomenon of the 20th Century Dinner Bell.

"After my grandmother passed away my family did what most families do. We sorted through her belongings dividing up what we wanted to keep and getting rid of what we didn't want. In that pile was an avocado green Hitachi rice cooker, which I claimed for myself. Her cooking tools, pots and pans were the most coveted of all her effects. Like most Cajun grandmothers she was famous for her cooking. All the meals she was known for-gumbo, rice and gravy, étouffée -included rice cooked in that Hitachi. I decided to take a photograph and post it on Facebook. The response was surprising. It seemed everyone had a story and fond memories about the Hitachi rice cookers. The stories people shared were about the rice pot, but really they were about the family and meals shared together. I decided this could be an interesting project. Through photographing these Hitachis (which are no longer in production) and recording the stories behind them I could document the lifestyles of the people in Acadiana. Since starting this project I have been privy to so many stories just by talking about the Hitachi rice cooker. Some sweet. Many funny. A few sad. But all tell of the people and culture that we have in Acadiana."   - Lucius A. Fontenot 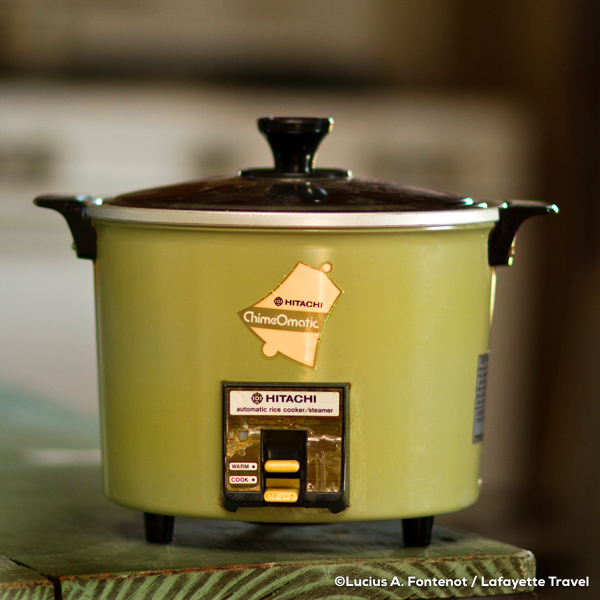 When I was a child I thought that Hitachi was a Cajun French word. Why wouldn't I? They were in every house that I knew-my parents', my grandparents', my aunt and uncles, my friends house. Then when I was around 12, I spotted a huge back hoe with the word Hitachi written on its arm. I made some comment to my Dad that I was glad the little Cajun rice maker company had done so well they branched out into tractors. My Dad looked at me as with his head cocked like a dog hearing a strange sound and said, "You do know that Hitachi is a huge Japanese company right?" My mind was blown. All these years I thought that we Cajuns had made the rice cooker.

Favorite Rice Dish
My moms Baked Chicken and Smoked Sausage Rice and Gravy. She says its so good because she doesn't do anything to it. She buys a seasoned, cut-up fryer and a link of pork sausage usually from T-Boys in Mamou and puts it in her Magnetite roaster, sticks it in the oven, covered at 350 until tender then uncovered until crispy and there is a thin, golden gravy to put over the rice. She usually serves it with smothered sweet peas. 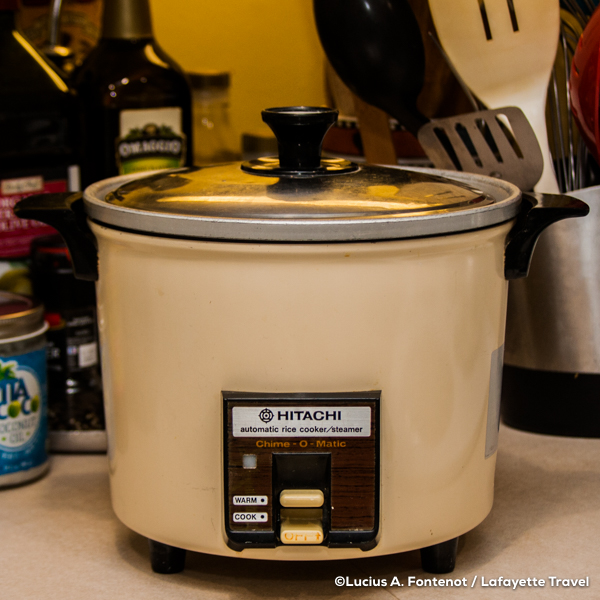 My Hitachi rice cooker's nothing special to look at, just a basic beige cooker. But it does have a story. I got married at 18 and it was my mother's wedding gift to me. Two years later, she died. There was so much more I needed to learn from her, but I didn't even know what those questions and lessons were. That cooker has been with me for more than 30 years -- it outlasted the marriage and has fed me in a way that goes beyond bringing rice to the table. 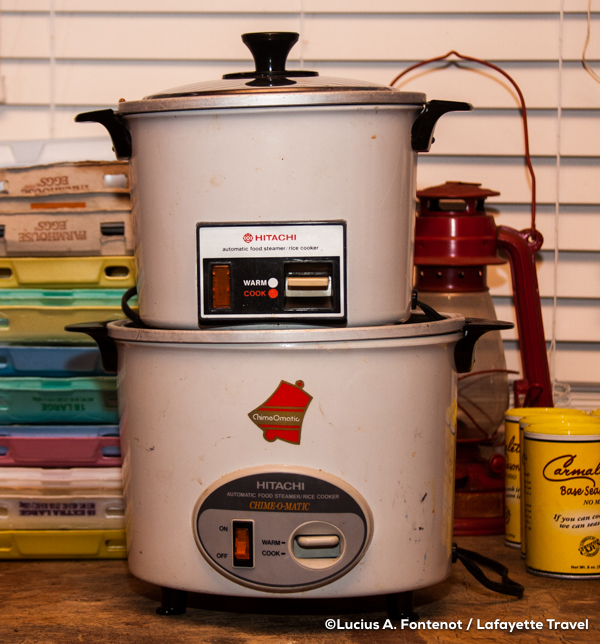 I got my big Hitachi rice cooker as a wedding gift. The other at Goodwill. These rice cookers were all I knew. They were in every home I went in. I didn't even know another company made rice cookers till after I was married.

Favorite Rice Dish
Round Steak Rice and Gravy. We eat it all the time.

I had a Hitachi rice cooker that was passed down to me. I think I was the third person in the family to have it. It was kinda like whoever didn't have one, got one. But, it was destroyed in Hurricane Katrina. After moving back home to Lafayette I found one on Craig's List the same color as the one I lost. I contacted the lady right away. We talked and the story of my old one came up. She insisted that I have it, for free. I picked it up and insisted on giving her a little money. It was in pristine condition. Nothing cooks rice like those pots.

Favorite Rice Dish
Rice and gravy, gumbo, étouffée, catfish courtboullion. How are you supposed to pick just one? 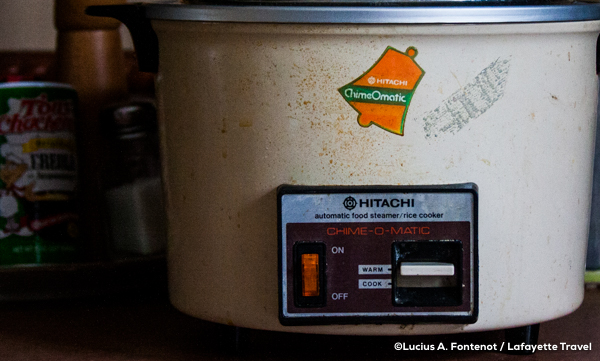 My mom always had one when I was growing up. After my grandfather died in 1994 she gave it to me. It used to have a piece of duct tape on it. Not sure why. But it recently fell off. The thing I remember most about those rice cookers is that ding. It was like the diner bell-come serve yourself a plate.

Favorite Rice Dish
Really the only time I use it is once a year to cook rice for a gumbo on Easter weekend at a friends camp in Toledo Bend. 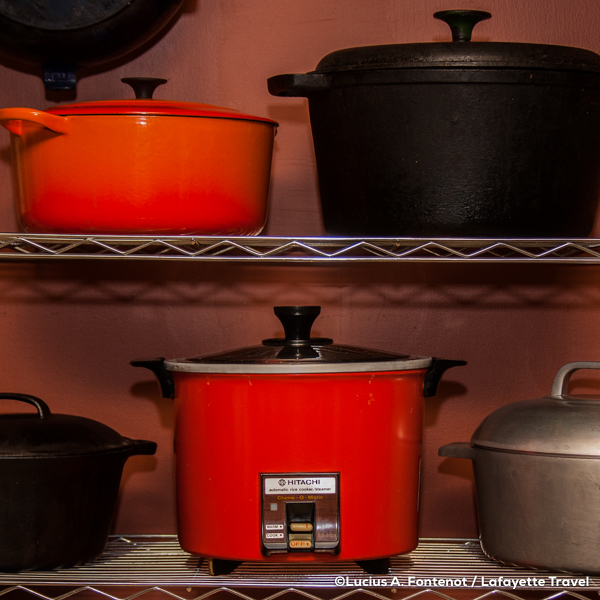 This was my grandma and grandpa's Hitachi rice cooker. Well I guess it was more my Grandpas because his name is all over it. After my grandpa died a little over a year ago and we were going through some stuff with my grandma she said I could have it. I never realized how simple a rice maker actually made things. Just never felt the need. It wasn't until after I got one I realized how convenient they were. I think about my grandpa every time I see and use it now.

Favorite Rice Dish
7 Steak Rice and Gravy. But really I like cooking any kind of rice and gravy. 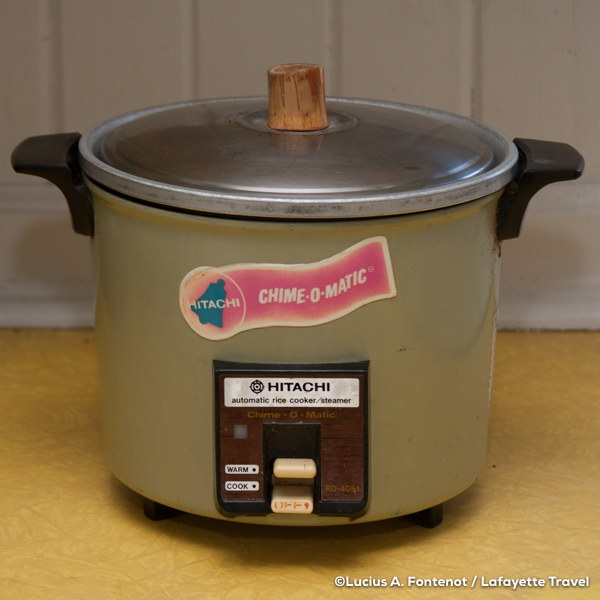 The small green one is my parents from college. It's the one I grew up with. About 7 years ago my dad left the lid on a burner that was still hot and the knob melted. He got a screw and put this piece of bamboo from out the backyard to replace it. The one that I've got is from my dad's godfather. When he passed away we had to clean out his house. In the back shed we found two Hitachi rice makers, still in the boxes. I said, "That's mine!" I think we kept the other one in the box just in case someones breaks or dies. The other brands of rice cookers just don't work right. They don't have the ding. It's just not a Hitachi. I think its weird how a generation that saw Japan as an enemy latched on to this rice cooker. I mean, it is called Hitachi, its right there in the name. Its not like they tried to make it sound more American.

Favorite Rice Dish
We cook so much rice. We eat rice with everything.

The Hitcahi rice cooker project by Lucius Fontenot is ongoing with no foreseeable end. There are Hitachi rice cookers hes heard about and in the process of photographing and collecting stories. If you have a Hitachi rice cooker and want to share your story, feel free to contact Lucius by emailing him atlucius.fontenot@gmail.com.